Nizza to Meet You

I've helped organize the past two Short Mystery Fiction Society Bouchercon meetup meals but unfortunately have been unable to attend myself. So when the SMFS's Michael Bracken invited me to Sunday dinner while he'd be in New York City for a social media conference, I was more than happy to make it.

This year's recipient of the SMFS's Edward D. Hoch Memorial Golden Derringer for Lifetime Achievement, Michael extended the invitation to any other members in the area, and Queens-turned-Manhattanite Liz Zelvin accepted, being so kind as to fill Michael's request for a "uniquely New York" restaurant in Nizza NYC. 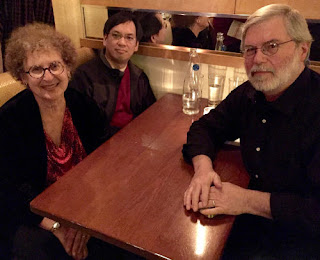 I arrived early to the lobby of Michael's hotel on West 37th Street, but Liz was delayed, so Michael and I walked-and-talked ahead to Nizza, continuing our chat over a meatball appetizer, until Liz arrived with a story of forgotten MetroCards and unannounced subway delays.

Liz also had free books: an anthology featuring one of her stories for Michael and her poetry book for me. Michael paid the check, and I left a generous tip to make last night a true team effort.
Topics: Food and Drink, Travel
2 comments:

Like a rediscovered piece of music, the short story that led to this graphic novel has an interesting history: My late friend David Thompson published it in Busted Flush Press's 2009 reprint of Crossroad Blues—Ace Atkins' 1998 first novel featuring blues historian and former New Orleans Saint Nick Travers—and it garnered 2010 Best Short Story Edgar®, Macavity, and Anthony nominations. However, Atkins wrote the story in 1996, so it can also be seen as introducing Travers.

At Christimastime, Nick gets to the truth behind the apparent suicide of a sax player friend. Marco Finnegan's artwork is large and striking and reminds me of Darwyn Cooke's graphic adaptations of Richard Stark's Parker novels. In the book's introduction, Atkins recalls meeting Finnegan via sketches Marco shared on Twitter. I was following Ace at the time, so part of the fun of this book is having looked on as it came together.

I was not aware of the story's publication history before I read the introduction, but I'd been friends with David since 2006. Along with bringing Nick Travers back to life, this graphic novel reminded me how much David championed material he believed in.

Now a couple years past forty, I'd like to have done more, but it's okay I haven't. My birthday never fails to remind me to appreciate life. Being here, doing stuff I like doing, means more in the moment than how much stuff I get done. At least that's what I'm telling myself this year.
Topics: Birthdays
3 comments:

Club owner crime boss Cornell "Cottonmouth" Stokes (Mahershala Ali) isn't pitted against Cage to begin with, thanks to their mutual respect for Pop. The balance is tipped when two of Cottonmouth's employees try to rob him. One of them, Chico, seeks refuge at Pop's, but the man Cottonmouth sends to kill him goes overboard, shooting up the entire shop. Luke is able to shield Chico, but Pop is killed.

Like Jessica Jones and Daredevil Season 2, Luke Cage runs into pacing problems. Episode 4 unnecessarily goes into the backstory of how Luke got his powers in prison, and yet Luke's showdown with Cottonmouth results in Cottonmouth being arrested by Episode 6, at which point I double-checked that there were thirteen episodes in all.

In the second half, Luke's old nemesis, Willis Stryker (Erik LaRay Harvey), reemerges with armor-piercing bullets, one of Justin Hammer's knockoff Iron Man suits, and a penchant for melodramatically quoting the Bible to justify himself. By the end, new masterminds rise to power, and Cage decides it's time to answer for his criminal record. Sorry to spoil that, but I think it's a flaw in most of today's gritter takes on superheroes. The point of superhero stories is that good still overcomes evil and wins. Dress your story in so much grit that you fail to make that point, and your story fails. In a world as naturally gritty as Cage's, it's even more important to show that good wins. I didn't want to wait for next season or The Defenders to see it.
Topics: Comics, Reviews, TV
No comments: