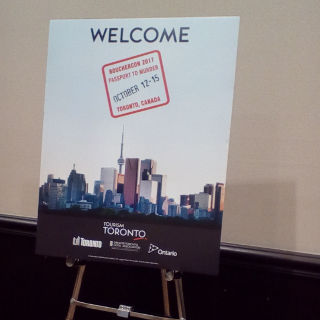 Thanks to the kindness of Canadian cousins, I was able to attend my fourth Bouchercon World Mystery Convention, riding from Long Island to Toronto last Tuesday. Due to timing on particular days, I was not able to attend all the panels I wanted, but attended others I thought I'd miss.

More important to me was catching up with old friends and making new ones, which at Bouchercon is as spontaneous as exploring the hotel. I still value being in the moment more than live-tweeting or taking photos, but I did use the free wi-fi to document more of the con than I have in the past. See my tweets tagged #Bcon17 and #Bcon2017.

The highlight for me was meeting Kevin Burton Smith. I worked eight years for Kevin as fiction editor of his Thrilling Detective Web Site. Looking back, I suppose it was one of the first electronic publications, and I hope you find the stories hold up, or you have fond memories of them.

Kevin and I emailed and played Twitter tag to plan on seeing each other, but finally shared a late breakfast Saturday because we ran into each other in the hall. We got along as well as I hoped.


A final fun surprise of the con came when John McFetridge, whom I befriended on the last day of Bouchercon 2008, said I was mentioned in this year's Bouchercon short story anthology, Passport to Murder, which he edited. Having received a rejection for the story I submitted, I had to inquire further, and John explained that working on the anthology reminded him of a story he wrote for a flash fiction blog challenge I helped put together with Patricia Abbott and Aldo Calcagno years earler.

That's something, and I'm flattered, but there's no better feeling than using my words to achieve just the effects I aim for, that also resonate with editors and the general public. That's why I keep writing.

The best thing about Bouchercon is being among people who not only know and appreciate each other's writing but also their efforts off the page.
Topics: Appearances, Nostalgia, On Writing, Personal, Travel
2 comments:

Pauley Perrette, who has played NCIS's forensic scientist Abby Sciuto all fifteen seasons, announced yesterday this will be her final season on the show. Her decision to leave dates back to last season. Showrunners George Schenk and Frank Cardea knew of it, and are planning an appropriate send-off.

In its long run, NCIS has had its share of departures, most notably cast members Sasha Alexander, Michael Weatherly, and Cote de Pablo, and creator Don Bellisario. Abby is probably the character most representative of the show, though, and may be the most difficult to fill in for. To pull that off would be some feat, but it's also an accomplishment that Abby is both goth and serious scientist and has been more or less embraced from the start.

Thank you, Pauley, and best of look on future projects.
Topics: NCIS, Nostalgia, TV
No comments:

It's my birthday again, and I wish it weren't in the aftermath of a horrific shooting. I am reminded, though, that the worst of humanity is no match for its best. For every killer, there is someone who reveres all life. For everyone who gives in to hate, there is someone who refuses to let it in. This is how I choose to live, and I'm gratified to have had the chance.
Topics: Birthdays, Commentary
2 comments:

Ned and Stacey: The Complete Series

Ned and Stacey originally aired on FOX for a season-and-a-half (1995–97), starring a post-Wings Thomas Haden Church and Debra Messing in her first lead role. Advertising executive Ned Dorsey marries Stacey Colbert to land a promotion. Freelance writer Stacey marries Ned to move out of her parents' house into his hi-rise apartment.

The premise may have been a stretch, but something about the characters appealed to me as I caught up with the series–including the eleven remaining episodes of Season 2–on cable. Sony released the first season on DVD in 2005 but, due to poor sales, canceled a release of Season 2. That's how long I waited until Shout! Factory released the complete series last Tuesday.

Ned and Stacey wasn't the usual tale of opposites eventually attracted to each other. Ned isn't a completely callous alpha male, and Stacey isn't a completely altruistic do-gooder. Both initially use each other for material gain. Both hurt each other, though never intentionally. Neither is every issue resolved by the end of an episode. These quirks may have shortened the show's broadcast life, but they are also what I remember and like most about it.

Stacey's sister Amanda (Nadia Dajani) and Amanda's husband Eric (Greg Germann) were memorable as well. Amanda was dominant and brash, but she had Stacy and Eric's best interests at heart. Eric responded to Amanda with calm and flexibility. Showing these same qualities as a best friend, Eric helped humanize Ned.

By the final episode, Ned had lost his advertising job and planned to drive to Texas. Stacey, meanwhile, had moved into an apartment of her own. Ned visited her on his drive, and they professed they loved each other. It's not romantic love as we go to black, but love between unexpected friends.

As I prepared to buy the DVDs, I was pleasantly surprised to learn Ned and Stacey was created by Michael J. Weithorn, who wrote my favorite episodes of Family Ties. Weithorn would find commercial success as creator of The King of Queens.
Topics: DVD, Nostalgia, TV
No comments: