I had a nice Thanksgiving with the extended family, visiting an aunt on dialysis. She's had a few hospital stays this year and uses a wheelchair to get around, but the past few months, she's been home and is eating better.

I know I'm posting a week late. It's been hard to find things I'm thankful for this year. I'm galled by how poorly President Trump is representing America, but in response I've made more of an effort to understand all my representatives' agendas and how they stack up against mine. I'm thankful that, thinking more critically about my representatives, I'll be able to make better choices from now on. (No, I didn't vote for Trump.)

I'm also galled that several celebrities were allowed to get away with sexual harassment or worse for years, Trump for one, but I'm thankful they are being exposed and expelled. I hope it leads to higher standards of behavior in all workplaces.

Finally, if you've kept up with this blog, you know I've been working on a short story on and off for a year, not counting that I started it as a novel twenty-two years ago. On one hand, I wish I'd made more progress. On the other, I'm thankful to be working on it, to have not given up.
Topics: Commentary, Holidays, On Writing, Personal
No comments:

The Punisher is far from my favorite comics character, but after a long week, including a planned neighborhood power outage and three days deciding my 2018 healthcare package, I happily dived into the full first season, which premiered on Netflix today.

Introduced in Season 2 of Daredevil, this show of his own fleshes out and humanizes Frank Castle (Jon Bernthal). Building on the Daredevil arc of Frank discovering his former commanding officer was behind a heroin ring, the main plot concerns the cover-up of unsanctioned CIA Operation Cerberus, which tasked Frank and fellow Force Recon marines with capturing high-value targets in Afghanistan.

As we begin, Frank is doing a good job letting the world believe he is dead while carrying out personal missions of vengeance. Phone calls from a mystery man calling himself Micro (Ebon Moss-Bachrach) draw Frank into the plot, exposing him to pursuits by Homeland Security agent Dinah Madani (Amber Rose Revah) and former Cerberus operators.

The Punisher is tonally similar to Luke Cage in its street-level action, but more realistic because none of its characters have superpowers. Frank has only his considerable tactical prowess and incredible will to survive, the latter shown by imagery of Frank's thoughts, sometimes diverging far from what happens to his physical body.

As he comes to know and collaborate with Micro, Frank reveals the people he trusts, people then to whom he is inevitably vulnerable. As narratively sound and satisfying as the show is, be warned it also features violence, gore, and sex. Taste for any of these is up to you as viewer.
Topics: Comics, Reviews, TV
No comments: 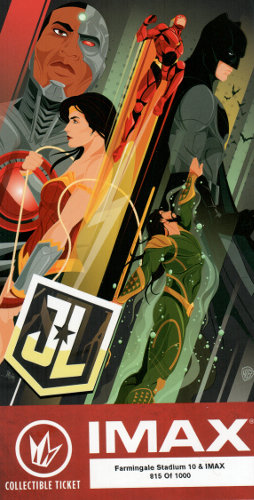 Just back from watching with three fellow superfans.

Sometime after Batman vs. Superman, we find Bruce Wayne and Diana Prince recruiting Aquaman, The Flash, and Cyborg to team up against Jack Kirby's Steppenwolf and the Parademons of Apokolips, ancient enemies of the Amazons, Atlanteans, and humans.

Team-up movies face a number of challenges solo movies don't, most obviously to make the stakes high enough to warrant the team-up and to divvy screen time fairly among the heroes and villains. I'm glad to say the new League recruits left distinctive impressions true to their characters. This movie will make them new fans. I already liked Ben Affleck's older Batman and Gal Gadot's Wonder Woman, and they continued to deliver.

All that said, Superman is the reason I've watched Man of Steel, Batman vs. Superman, and Justice League. If and how he rejoined the battle were important to me, and I think someone (or someones) bobbled the ball. I'd read comments by Henry Cavill that moviegoers would see the classic champion we know and love, but his transition from death to that was too abrupt for my liking.

And finally, Steppenwolf and the Parademons are your standard, otherworldly (less realistic) army of manufactured evil, but they were adequately shown to be too powerful for any one hero to beat, quite possibly too powerful for a team without Superman to beat.

On the large scale, Justice League is more cohesive than Batman vs. Superman, but doesn't surpass Wonder Woman in any way. However, its smaller, character moments are well thought out and worth fans' time.
Topics: Comics, Film, Reviews, Superman
No comments:

How I Was Raised

I hope the wave of Hollywood sexual harassment and misconduct revelations leads to lasting, positive change. I've done my share of thinking aloud about it on Twitter and have read several "How I was raised" responses. I offer my own as context for my tweets, grateful for all that went right in my upbringing and the wise decisions in hindsight I made for myself.

My attitudes were largely instilled by a well-educated extended family of mostly women on my mother's side. My father's was smaller but more distant. His mother favored two sons over three daughters, and his father's punishments were traditionally physical. Fortunately, my father was strong enough of character to reject that favoritism and break the cycle of abuse.

Both doctors, my mother probably had greater stature in the Philippines, but sacrificed working in America to raise my brother and me. I'm not sure which parent had the stronger personality because a single, soundly reasoned message always came down to us.

I should also mention the message I received from classmates, that I wasn't very desirable. Some did express attraction, but too playfully for me to know if it was genuine, so I did nothing. My experience, such as it is, leads me to want the right things in a relationship. More than physical attraction, a deep mutual understanding and desire to be together.
Topics: Commentary, Personal
No comments:

In a world of ever-increasing violence and tragedy, the phrase "thoughts and prayers" has come to represent empty language with no helpful action to back it up. As a Catholic, however, I honestly turn to prayer when no earthly solution appears adequate or imminent. After we've done all we can as individuals, there is still much we can't control, that we must leave to others, or other forces.

My prayers may not be answered adequately from other points of view, but the thought does count and may lead me to think of something more I can do to help.
Topics: Commentary, Personal
No comments: