Yes, Donald Trump is as bad a public representative as I thought he'd be. If you choose, much of this year can be dominated by what he's done in office, but I choose to live as best I can regardless.

For me, this year was dominated by work on a story that started as a novel in 1995. I'd given up on it for years and could have done the same at various times this year, but I didn't. Even when I had no idea how to go on with the story, something about it wouldn't leave me alone. So while it was my nemesis, it was also the most fun way I could think to spend my time. This must be how novelists feel working on books for months or years.

Bouchercon 2017 was a highlight, getting to dine with members of the Short Mystery Fiction Society who had long been online friends, and of course meeting my friend and former boss at The Thrilling Detective Web Site, Kevin Burton Smith.

I'm not much for New Year's Eve or New Year's resolutions. I don't let the calendar dictate when I make changes. That said, I do wish you a happy and fruitful new year.
Topics: Nostalgia, Personal
No comments:

According to her daughter Jamie, Sue Grafton died Thursday, December 28, after a two-year battle with cancer. In the ranks of women writers of P.I. fiction, Grafton is up there beside Marcia Muller and Sara Paretsky and may be the most recognized of the three among the general public.

Her Kinsey Millhone was the first female P.I. I read, and Millhone's world was as immersive to me as that of Robert B. Parker's Spenser. I only stopped reading the Alphabet series back-to-back so as not to limit my taste as I'd done with Parker.

Others have more comprehensive, more personal tributes to Grafton than I. To me, she represents a writer's writer, one who saw every book as a new challenge and always took that challenge on. Also—though I'm a known supporter of tie-in novels, continuation novels, and TV and movie adaptations—I admire that Grafton never sold Kinsey to Hollywood having written the first Kinsey book, A is for Alibi, as the ticket out of her screenwriting career.

Grafton published Y is for Yesterday in August, and her daughter writes that though Z is for Zero was scheduled for 2019, Sue had not begun writing it, and respecting her wishes never to have a ghostwriter, the Alphabet series will end with Y.
Topics: Commentary, Nostalgia
No comments:

Having enjoyed the first season of Brad Wright's time travel drama on Netflix last year, I was ready when Season 2 arrived this morning. It opens with our heroes in FBI custody, and the future artificial intelligence The Director, that sent their consciousnesses to the present day, offline.

Following protocol, Traveler 3468 (Eric McCormack) advises his FBI partner to destroy the technological evidence of the Travelers' existence. While examining said device, though, the FBI team is replaced by Travelers, who then help 3468's team escape.

Season 2's major arc involves Traveler 001, sent into the body of Vincent Ingram (Enrico Colantoni) with orders to die in the 9/11 World Trade Center attack. Unwilling to comply, 001 fled the North tower as the first plane hit. Using knowledge of the future, 001 became a wealthy, reclusive man, remaining paranoid that The Director would eliminate him. Deducing that 001 was behind their previous torture, 3468's team pursues him on their own, but The Director pulls them back at the last moment.

The core of the series remains the extent to which our heroes have come to care about the people in their lives. Notably, for his wife's sake, 3468 tries to protect his unborn child, though protocol prohibits Travelers to reproduce. Marcy (MacKenzie Porter) performs a life-threatening procedure on herself to recover her host's memories as well as part of her personality lost when The Director reset her last season. Carly (Nesta Cooper) tries to work things out with her abusive boyfriend in hopes of keeping custody of their toddler son.

Making viewers want what our heroes want, Travelers then deftly jeopardizes what they want.
Topics: Reviews, TV
No comments: 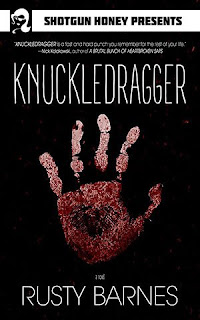 Thanks to publicist Wiley Saichek, I'm giving away a digital copy of Rusty Barnes' novella Knuckledragger from Down & Out Books:

In Knuckledragger, hooligan and low-level criminal enforcer Jason "Candy" Stahl ("Irish" to his sometime girlfriend Rosario) has made a good life collecting money for his boss Otis, breaking the occasional leg or elbow, fucking Rosario, and living the life in Revere, MA. One collection trip, though, at the Diovisalvo Liquor Store, unravels events that turn Candy's life into a horror-show.

In quick succession he moves up a notch in the organization, overseeing a chop shop, while he falls in lust with Otis's girlfriend Nina, gets beaten for insubordination, and is forced to run when Otis finds out about Candy and Nina's affair.

Events stretch as far as Houston, Texas, where Otis and Candy have a final showdown where everything is at stake. Loser gets nothing.


To enter the giveaway, email G_SO at YAHOO dot COM with subject line "KNUCKLEDRAGGER Giveaway" and in the message body, mention the ebook format you'd like to receive (Kindle, Nook, Kobo, or iTunes).

On Thursday, December 28, The winner will be chosen at random and notified by email.
Topics: Contests
No comments:

All I Want for Christmas

My weekly poetry site, The Five-Two, is booked through mid-January 2018. Beyond that, submissions are needed to fill January and February and ensure the site debuts a new crime-themed poem each Monday without interruption. Please consider writing and submitting poems yourself and spread the word to anyone interested.

I would like nothing more than to find a virtual stack of submissions on Christmas morn. If you need more time, try a deadline of December 31. For February, I'd like to continue our tradition of love- or passion-themed crime poems, but I am open to any themes anytime.

Thank you for your ongoing interest and support. All the best for the holidays and the new year.
Topics: Holidays, Other Blogs, Poetry
No comments:

I'm back from seeing The Last Jedi with much the same group of friends who saw The Force Awakens. Not to spoil anything, I disliked how Awakens ended and how it characterized Kylo Ren overall, lowering my expectations for Jedi. I expected Luke Skywalker to be part of the story, but only for a ceremonial passing of the torch, like Han Solo's role in Awakens.

To my delighted surprise, Luke was as much a part of the story as Rey and Finn. Rey's arrival forced him to confront his failings, and he returned to be hero younger viewers have heard of and older viewers like me remember.

Now to my main complaint: On one hand, Jedi consciously turned away from retelling the original trilogy's father-son redemption arc, and it used humor well to say it didn't take itself too seriously. On the other hand, there were too many moments of overindulgence and heavy-handed homage not to mention them as reasons you might be less than thrilled as the closing credits roll.

I don't know what to expect from Episode IX, but you know I'll be in line for it.
Topics: Film, Nostalgia, Reviews
No comments:

On December 5, Bill Crider blogged what may turn out to be his final entry, giving an update that his cancer had worsened to the point he was advised to enter hospice care. Today, Patti Abbott is collecting tributes to Bill through her Friday's Forgotten Books series.

This is a spontaneous entry, more about my friendship with Bill than his books. We first corresponded through DetecToday, my discussion group for 1980–present P.I. fiction. We were also great fans of Robert B. Parker's fiction and of short stories, serving as reviewers on Nasty. Brutish. Short.

Bill was first to greet me at my first Bouchercon, 2008 in Baltimore. At Bouchercon 2011 in St. Louis, he saw me in the audience at one of his panels and recommended my ebook of 1930s aviator stories, Stones. I'm especially grateful to have chatted with Bill two months ago at Bouchercon 2017 in Toronto.
Topics: Appearances, Nostalgia, Other Blogs
No comments: