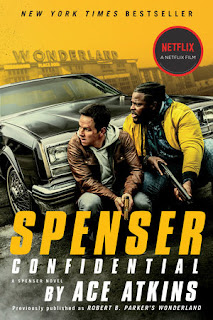 I see that the repackaging will entice people to buy the book, but I'm not sure the book and movie should share a title, given how much we've heard they differ.

Seeing the final cover image, I'm glad the Wonderland signage is in the background. Though Hawk isn't in the book, Hawk in the movie is in a similar position to Sixkill in the book. There is also, in fine print, "Previously published as Robert B. Parker's Wonderland. Well done, Putnam.
Topics: Ace Atkins, Commentary, Film, Robert B. Parker