I'd been checking Netflix for more than a year since hearing a Danger Mouse reboot was coming. I don't know the exact day it premiered, but I found it this past Saturday morning and have watched most of the episodes.

Alexander Armstrong and Kevin Eldon have the right cadence as DM and Penfold respectively. The sensibility is largely the same and often homages the classic show.

Some characters have been tweaked, most notably Professor Squawkencluck from a German male mole to a Scottish hen, and Baron Greenback to the German von Greenback. Squawkencluck and DM have a markedly more antagonistic relationship with a dash of sexual tension.

Overall, the show succeeds as both an update and a slice of nostalgia. On May 19, CBBC picked up a second season. Welcome back.
Topics: Nostalgia, Reviews, TV
No comments:

In the aftermath of an explosion at a safehouse in Tel Aviv, the team learned Ziva David had been killed. This left Tony DiNozzo feeling unmoored, but he found purpose when Mossad revealed he and Ziva had a daughter.

While Tony took the rest of the day off, the others, aided by FBI agent Tess Monroe (Sarah Clarke) and British SIS agent Clayton Reeves (Duane Henry), tracked down old nemesis Trent Cort. Another case in the books, Tony, realizing his priorities had changed, told Gibbs it would be his last.

I liked that the end of Ziva's arc tied into Tony's. I didn't initially believe she hadn't told Tony about their daughter because she wanted to raise the child herself and not disrupt Tony's life. It sounded like an excuse for the revelation's timing, but in Cote de Pablo's Season 11 departure episode, Ziva did rebuff Tony's willingness to leave NCIS to be with her.

I like Monroe and Reeves as potential new team members, but it's hard to imagine Tony won't be stepping off that elevator next season. Cheers and good luck, Michael Weatherly.
Topics: NCIS, Nostalgia, Reviews, TV
No comments:

My View of Castle

Last week, ABC canceled the Nathan Fillion-Stana Katic police procedural Castle after eight seasons. Though the show had been on the bubble the last few seasons, canceling it now surprised me because, despite Stana Katic and Tamala Jones being let go, Nathan Fillion, Jon Huertas, and Seamus Dever had signed deals to return for another season.

I'm a Fillion fan from Firefly and have been a crime fiction fan since 1993, so you'd think Castle would be in my wheelhouse. I enjoyed similar shows—Monk, Bones, and Psych—but for me Castle started on too light a note to become very serious. And some episodes wanted to get dead serious. The longer series go, the less I expect them to maintain a single tone. Part of longevity is changing with the times. If a show's tone changes, though, I'm more willing to watch a serious show become lighter than a light show become more serious.

In case Castle was canceled, an extra scene was filmed to provide closure. The finale goes from Castle and Beckett holding hands after being shot to seven years later having happy family time. The abrupt shift couldn't be helped with the timing of ABC's decision, but it leaves me with the mixed feelings I've always had about the series.

As highly as I think of Firefly, Castle proved Nathan Fillion could lead a show for years. Meanwhile, Stana Katic's Beckett was the core of the show, the character who most influenced the audience's feelings about events and other characters. She would have been difficult to replace.
Topics: Nostalgia, TV
1 comment:

Just this past Thursday, I heard Darwyn Cooke was battling an aggressive form of cancer. Word broke early this morning he had died.

I discovered and enjoyed Cooke's work with the Warner Bros. cartoons Batman: The Animated Series and Superman: The Animated Series, but The New Frontier comics run means the most to me. Bridging the Golden and Silver Ages, Cooke presented the most compelling portrait of Hal Jordan to date, heavily likening Hal to American hero Chuck Yeager.

Evoking the era of unabashedly good-natured heroes, The New Frontier helped me remember why I first admired them. I can say the same about Javier Grillo-Marxuach's Middleman comics and TV series, so I wasn't surprised at Javi's tweet:

when matt keeslar was cast as "the middleman" i gave him a copy of darwyn cooke's "the new frontier", told him it was all he needed to know.

Robert B. Parker's Slow Burn signing by Ace Atkins at The Mysterious Bookshop

The title particularly resonates because, through five books, Atkins has moved carefully but clearly from capturing Parker's characters to updating them. Many of Parker's biggest fans approve because, for my money, Atkins is the most knowledgeable, most respectful fan of all.


I knew Ace originally signed a three-book contract that was extended for two books, bringing us to Slow Burn. So, to cap off the Q&A, I asked (slightly anxious) if his contract had been extended again. And indeed it has, for two more books. Breathe. 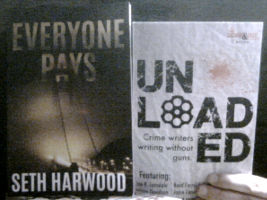 Along with Slow Burn, I bought Unloaded, a collection of gun-less crime stories, with proceeds benefiting States United to Prevent Gun Violence. I also bought Everyone Pays, a new psychological thriller by my friend and podcasting pioneer Seth Harwood. There's a signing for Unloaded today, and for Everyone Pays Friday. I regret I can't make either one, but you should go.
Topics: Ace Atkins, Nostalgia, Robert B. Parker, Travel, What I'm Reading
1 comment: